Denny Hamlin was disqualified from NASCAR Xfinity Series victory at Darlington in the highest-level use of the category’s new approach to rules infractions so far.

NASCAR has historically dealt with technical infringements via fines, points deductions and personnel suspensions because it was reluctant to confuse the picture for fans by changing race winners retrospectively.

But it has changed its policy for 2019 and made clear it was willing to disqualify race winners for the first time since 1960.

The first instance of that policy in action came in June when Ross Chastain was stripped of a Truck Series victory at Iowa Speedway for a ride height infringement.

On Saturday Hamlin became the first person to lose a win in one of NASCAR’s top two series when his Joe Gibbs Racing Toyota was found to be too low in the left front and too high in the right rear following his victory in the second tier Xfinity Series.

JGR has until midday Monday to appeal the penalty.

The top five finishers plus one random addition – on this occasion eighth-placed Noah Gregson – had their cars inspected.

Xfinity Series director Wayne Auton said it was no surprise that teams would be closer to the limit of rules tolerances in this part of the season.

“I think you have to look at the garage area,” Auton said.

“We’re in the middle of a 15-week stretch [of consecutive races].

“The playoffs are coming and everybody is pushing everything they can to get that little bit they can to win the race.”

This is the fourth time this season a driver has been disqualified from an Xfinity series race and the first time a race winner has been affected.

So far there have been no disqualifications from the Cup series. 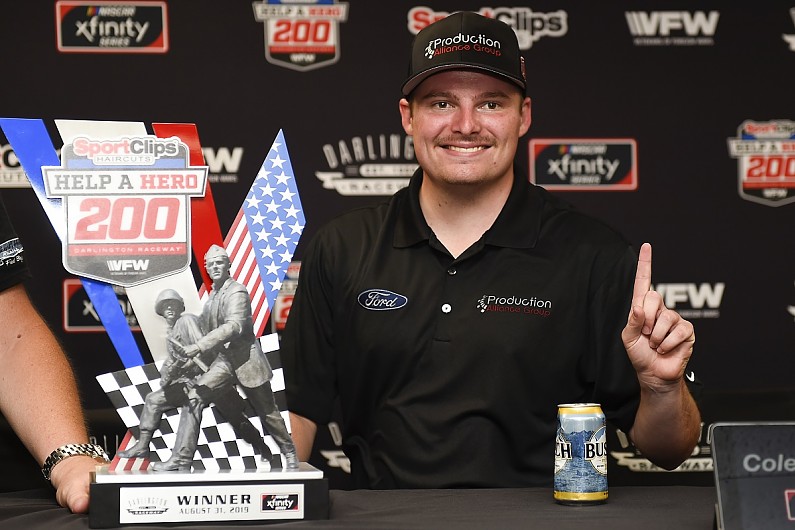 It gives title contender Custer his sixth victory of the 2019 season, which ties him with Christopher Bell for the most in the series this year.

“It’s a really strange feeling, obviously,” Custer said after being notified of his victory.

“You don’t want to win that way but it is what it is. We all play by the same rules.

“Was that the deciding factor? No. That wasn’t the reason he won the race but it is what it is.

“We get the points, we get the money and we get the trophy, I guess. We’ll take it.”