23XI Racing co-owner Michael Jordan says driver Bubba Wallace has the talent to “learn how to win” in the NASCAR Cup Series this year.

The team set up by basketball legend Jordan and Joe Gibbs Racing driver Denny Hamlin has debuted in Sunday’s Daytona 500, which hit pause after 15 laps following a 16-car pileup and a rain delay at the Florida superspeedway venue.

Wallace, meanwhile, avoided the crash having started from the back after his #23 car failed inspection twice, and then pitted early after suffering from a tyre failure after contact with veteran driver Derrike Cope.

In an exclusive interview with Fox Sports, Jordan explained that he felt that Wallace could finally break his Cup duck and visit Victory Lane, having just missed out on winning the second Duel race on Thursday.

“I feel like he’s going to learn how to win,” Jordan said.

“He’s got the talent. We would not have invested in him if he didn’t have the talent to win.

“By the end of the year, I think he’s going to have an opportunity and probably win at least a couple races. If it’s more, I’ll be elated.”

Jordan admitted that he was both excited and anxious about the upcoming 2021 season.

“I’m excited. I’m nervous, even though I’m not getting in the car. The thing is, when you are getting ready to play a big game, you’re nervous but you’re in control.”

He later added: “It’s a different kind of nervous. Nervous when I’m on the court – once again, I can go rebound. I can go shoot. I can play defense. Here, all I can do is cheer.” 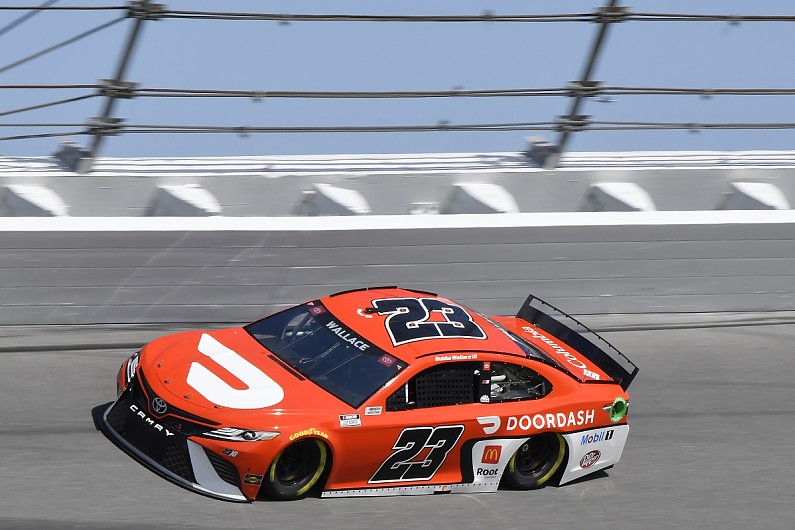 “I’ve thought about [becoming a team owner] so many different times because I had never seen a black owner or someone of colour that really owned a team or could dictate what happened with their team.

“Obviously, we haven’t really been prominent in this sport, but the opportunities have never been presented to you.”

Hamlin’s hopes for the new team are to simply show improvement over the season.

“Our team needs to get better,” he said. “I just want to see from the start of this season to the end of the season that the arrow goes in the right direction.”

Wallace also discussed NASCAR’s efforts to become a more inclusive environment, having also risen to prominence outside of the racing world when he became an outspoken voice for social justice last summer.

He led the charge to ban the Confederate flag, a symbol of the states that seceded from America in 1860-61 having opposed the abolition of slavery, from NASCAR races.

In doing so, he became the target of many right-wing voices, including former President Donald J. Trump.

“I thought it was a start for sure,” Wallace said of NASCAR’s drive to be more inclusive.

“For years, I have been asked how do we get more minorities in the sport? I’m like, ‘that’s a good question’ (and) that’s at the top of NASCAR’s list.

“And then the confederate flag rolled around. There is so much backlash against this flag from the minority group we are trying to attract. They are not going to be a part of this until it is gone.

“I said let’s make a stance, let’s put our foot down right now. We’re opening the door for a whole new family to come in and enjoy our sport.”