Kevin Harvick claimed his first ever Pocono victory in the first of two NASCAR Cup races at the Pennsylvania circuit this weekend.

The Stewart-Haas Racing driver started from ninth on the grid but dropped backwards in the first half of the race as the field ran a variety of strategies.

Harvick had relatively fresh tyres in the closing stages of the race and a comfortable lead ahead of Denny Hamlin in second.

He held the gap for a few laps as Hamlin struggled with vibrations, but the Toyota driver had an easier time passing lapped cars and was able to reel Harvick in. He was able to close in to just 0.761s behind of Harvick.

Pole sitter Aric Almirola and Joey Logano dominated the first two stages of the race, opting to pit much later than the rest of the field. Logano took the first stage win ahead of Almirola ahead of Ryan Blaney.

The pair were joined by Martin Truex Jr after the first pit stops cycled through. Truex was one of the earliest pitters, and his alternate strategy had helped him climb up from 11th on the grid.

Almirola took the second stage win ahead of Logano and Truex. 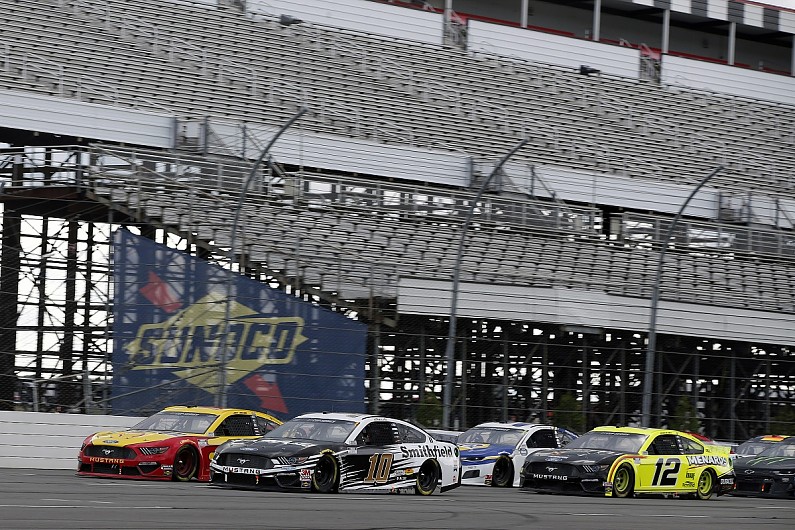 The trio led early in the final stage, but pit stop strategy put them behind Hamlin and Harvick after the final round of pit stops.

Logano’s chance of victory dissolved when his left front tyre punctured in the closing stages of the race, while Truex fell back to sixth with his own vibration issues.

The only major incident of the race came on lap 72 of 130 when Tyler Reddick ran into the back of Erik Jones. Both cars were heavily damaged and taken out of the race.

The incident could have an impact on tomorrow’s race and drivers will have to use the same cars in both races.

Any changes to key components will put the driver at the back of the grid.

Clint Bowyer took seventh ahead of Michael McDowell, who briefly led after staying out late in the final stint.

Pending any penalties, Ryan Preece is set to start on pole tomorrow. The Chevrolet driver finished 20th, just behind Austin Dillon. The top 20 finishers will be reversed for tomorrow’s grid, putting Preece, Dillon, and Kurt Busch on the front row of the grid.