KANSAS CITY, Mo. — When the Kansas City Chiefs held a news conference recently to introduce new defensive end Frank Clark, the player who showed up first to publicly welcome him wasn’t one of their long-time veterans. It was another new arrival, safety Tyrann Mathieu.

That may have been a small gesture on Mathieu’s part, but it was telling nonetheless. Mathieu signed with the Chiefs in March, but he’s already the face of their heavily renovated defense.

The Chiefs were an overtime loss to the New England Patriots in last season’s AFC Championship Game away from reaching the Super Bowl, a failure directly traced to their faulty defense. They overhauled the defensive coaching staff and base system, and acquired as many as seven new regulars to try to make quick and dramatic improvement.

Mathieu, along with Clark, is one of the key pieces in the rebuilding effort, and he isn’t wasting time trying to get the turnaround started. He embraced the defensive leadership role that was vacated earlier in the offseason when the Chiefs released safety Eric Berry. They also parted with another vocal veteran, linebacker Justin Houston.

“I’ve always been quiet, for the most part, especially any time I’ve come into a new environment,” said Mathieu, who joined the Chiefs after five seasons with the Arizona Cardinals and one with the Houston Texans. “Obviously, you’d like to have respect for the people around you.

“But for me, it’s about obviously embracing the guys around me and believing in them but knowing that there’s a certain direction we want to go in and everybody can’t lead you in that direction so a lot of the guys on our side of the ball, we have to really follow somebody in the right direction. Hopefully, I can lead those guys in that direction.”

We got ourselves a new vocal leader in the secondary.

The Chiefs aren’t shy about allowing him to take that role. Indeed, they liked his leadership skills from his time with Arizona and Houston, one reason he was signed to a three-year, $42 million contract.

“You can acquire as many great players, as many talented players as you’d like,” general manager Brett Veach said. “But until you have a catalyst to make it go, things will never work out the way you want. [Mathieu] was the catalyst that we had to have.”

Quarterback Patrick Mahomes said, “I think if you meet him you see the mentality and the leadership that he has just by being himself. I think that’s a huge thing that he’s going to bring to this team. He’s going to come in with the mentality of, he wants to be great, he wants to be known, [he wants] the Kansas City Chiefs to be known as a great defensive team, a team that can shut people down. He brings that mentality as he walks through the locker room and I think that’s going to be something that we will utilize this year.”

It’s not unusual for a high-dollar free agent to become a significant and immediate presence for his new team off the field as well as on it. But many such players find it takes time to find their place in the new locker room. The Chiefs’ major free-agent addition last year, wide receiver Sammy Watkins, acknowledged recently that he was more of a locker room observer.

Mathieu hasn’t had such reservations but rather has jumped right in.

“We’ve got a good group, a young group. As long as me, as a leader, gets everybody to buy in, I think we’ll be all right.”

End Alex Okafor, linebackers Damien Wilson and Darron Lee, cornerback Bashaud Breeland and safety Juan Thornhill join Mathieu and Clark as new defensive players who will have significant roles this season. Chiefs coach Andy Reid is holding Mathieu up as the example for how he wants those players and others to work. 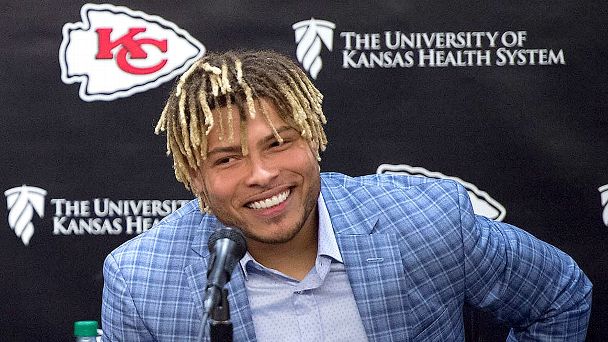 • New face of Chiefs’ D? Tyrann Mathieu
• Is Yannick Ngakoue a $100 million man?
• Giants-Redskins rivalry about to get heated
• Bud Dupree is Steelers’ $9.2 million bet
• This week: Minicamps for 23 teams

“The way he plays, the way he goes about his profession here, for young guys it’s invaluable [to see],” Reid said. “Here you bring in a veteran player that does it the right way. … He’s going to go out and he’s going to attack it and study and take the leadership role, handle it the way you’re supposed to handle it on and off the field.

“He’s kind of fun to be around. He’s [all] business. He shares that with the guys around him. He has those instincts [and] you can’t teach that part. That’s what he’s had. He had it in college and he’s had it in the NFL. He works hard every snap and that’s infectious. Along with Frank [Clark] being Frank and going 100 miles per hour every snap, that kind of stuff is contagious.”

Mathieu said he’s seen teammates respond positively to him at his previous stops.

“When I went to Houston last year, I really just went there not just trying to be a leader in particular,” he said. “I was just being myself. A lot of guys, they feed off me. … I’m extremely prideful in what I do. I think a lot of guys take heed of that. They look up to that.

“It will be my job to come in here, try to give some direction, try to give guys some motivation [and] some inspiration and then be an every-day factor. I want to be the same guy I am in the weight room that I am on the football field. I want to … help the young guys, help my teammates, help everybody be confident and make everybody feel like they’re special.”