Abu Dhabi Grand Prix stewards do not expect to rule on Haas’s protest of Formula 1 rival Racing Point Force India until Saturday due to the weight of evidence presented.

Haas protested Force India ahead of this weekend’s season finale because, it is understood, it contests it is wrong for its competitor to be running a car not of its own making.

The VJM11 used by Force India is the design created and built by the original Force India entity that fell into administration over the summer and was reborn, and re-entered into the championship, as Racing Point Force India.

F1 regulations state all entries are responsible for designing their own cars.

The hearing began at 11am local time on Friday but had to be paused ahead of opening practice to examine additional evidence.

It reconvened at 3.40pm and personnel were spotted exiting roughly an hour later.

The stewards said they were now “deliberating on the matter” but would need time to come to a decision.

“A substantial amount of written evidence was submitted and each party made extensive verbal representation,” they said in a note to teams and officials.

“It is anticipated that a decision will not be handed down any earlier than just prior to FP3.” 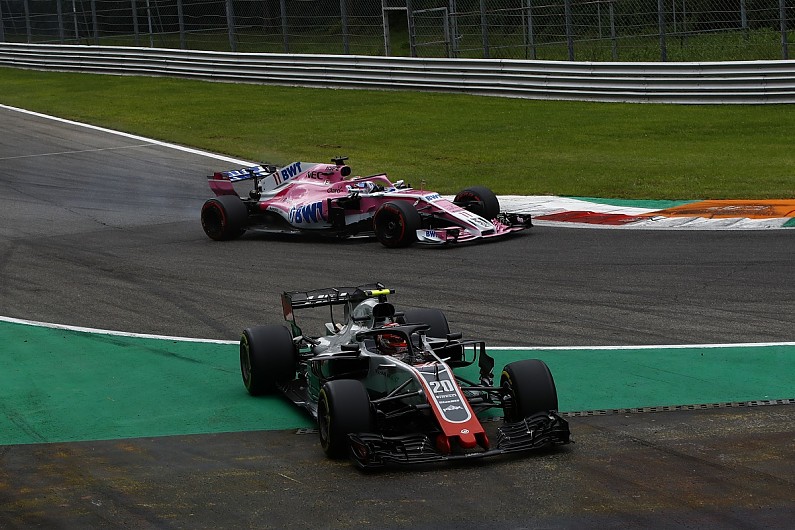 While the nature of Haas’s appeal is over a technical matter, the root of the issue lies in a disagreement over Force India’s eligibility for prize money since the team became a new entry owned by a new company.

Haas does not believe the ‘new’ Force India should be allowed to immediately qualify for ‘Column 1’ payments, which teams need to finish in the top 10 in two of three seasons to be eligible for.

It has been pushing for a resolution but indicated on Thursday that had not been forthcoming.

Force India team principal Otmar Szafnauer said earlier on Friday: “We were not expecting it, really, so [the protest was] a bit of a surprise.

“But in a way it is good that all the information can now be presented to the stewards and in due course they will make a very informed decision.”

Asked about the dispute by Sky Sports F1, Haas team principal Gunther Steiner said he preferred not to comment until the stewards made their ruling.

“I cannot disclose anything, it’s their job to do. I’d rather be quiet for once,” he said.

“For us it’s serious, and that’s why we took it to the stewards.”

He said the complexity of the argument was “why it takes so long, that’s why we had two hearings, and the stewards will take their time to think it through and to understand it, so they can make a good decision.”