You can’t blame Liverpool supporters if recent months have swayed them from believers to doubters.

A steady stream of points p*ssed away amid a spate of misfortune and an excess of calamity will do that to any fan base. So if Reds were experiencing a recently-familiar feeling of pessimism as their team grew increasingly nervous while defending a narrow lead that they seemingly refused to add to, the sight of Thiago’s nerve-settling maiden Premier League goal was like manna from heaven.

It sealed a big win over Southampton which sees Jurgen Klopp’s men move into the top six. More importantly, that and Sadio Mane’s first-half header keep their top-four hopes alive and, slender though those may be, it must be viewed as a step forward that Liverpool were able to capitalise on Leicester’s defeat to Newcastle on Friday night.

The Reds remain six points off Brendan Rodgers’ Foxes with a game in hand but this victory over the Saints suggests the luck may be shifting and the penny has finally dropped, perhaps just in the nick of time.

One goal has rarely been enough for Liverpool since the turn of the year, especially at Anfield, where Premier League clean sheets have been nowhere to be found since a goalless draw with Manchester United 21 games and five long months ago.

That crushing feeling of inevitability will have been heightened by the Reds’ shambolic failure to see out a victory against Newcastle a fortnight ago. But before Thiago’s late strike came some reassurance that perhaps this time, after nine home matches without a Premier League shutout, this might finally be the night when Liverpool don’t pull the trigger in their direction of their own feet.

Alisson was largely responsible for what little comfort Reds might have allowed themselves to feel. The Brazilian keeper has had a wretched season and a truly torrid time off the pitch too. But standing in the Saints’ way, Alisson was far more than just the shadow of his former self that he has appeared for much of the campaign. 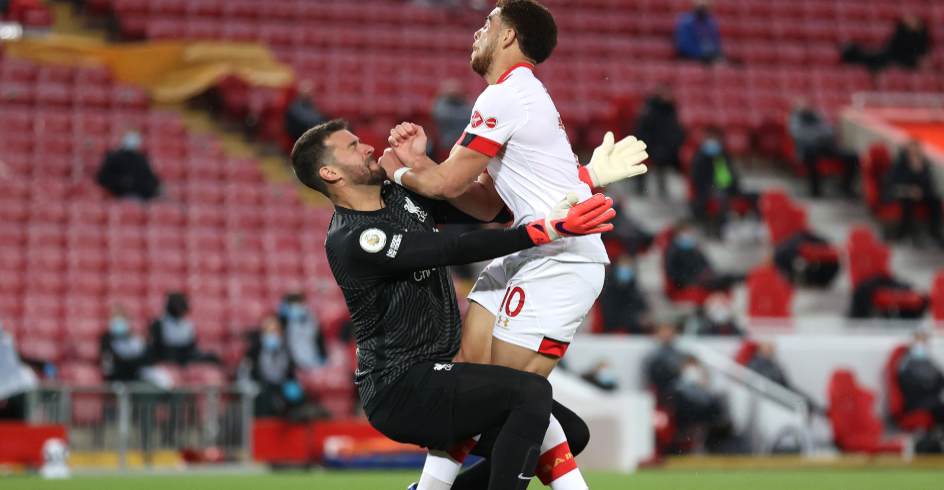 Were it not for his double save immediately before Mane’s header, it would have been the Saints in front rather than the hosts. Liverpool were ripped through on the counter-attack, with Nathan Tella teeing up Che Adams with a ball from the right. Alisson, though, stood big and wide to block the Scotland striker’s attempted dink. Even then, Thiago and Trent Alexander-Arnold tried to give the Nathan Redmond another opportunity, which Alisson gratefully grasped.

Alisson made a string of second-half saves – one was to gather his own dropped bollock after passing straight to Adams – totalling half a dozen over the course of the 90 minutes. Which kept him considerably busier than usual, with the Liverpool No.1 averaging 2.4 per game this term.

That suggests Liverpool were a bigger shambles than usual at the back, which would be unfair on their rookie centre-back partnership Nat Phillips and Rhys Williams.

Liverpool’s centre-back pairing of Rhys Williams and Nat Phillips were not dribbled past once vs. Southampton.

Phillips particularly was solid. But this is what we have come to expect from the Bolton Baresi. In his last six appearances, Liverpool have kept four clean sheets. Whatever Klopp decides about Ozan Kabak’s future, Phillips has showed he deserves the manager’s faith.

An improved performance from their back five gave Liverpool the platform upon which to build and it made their lack of fluency in attack irrelevant once Thiago had slotted past Fraser Foster as the 90th-minute ticked by.

It probably won’t be enough but Liverpool have given themselves a chance, which itself is a turn-up for the books.