Simon Jordan has accused Gary Neville, along with other football pundits, for “irresponsibly” trying to justify the Manchester United fan protests that led to the postponement of Sunday’s game against Liverpool.

Neville backed the actions of the United fans who stormed Old Trafford and advised the Glazer family to sell the “rotting” club.

But Jordan told talkSPORT there is no excuse for the fans’ behaviour.

“Fans are an integral and fundamental part of the game, and they’ve got an absolute right to air their views, but there is a way to do it,” Jordan said.

“There is a building narrative, and I think some of this was brought on by certain people egging on this outlook, whether it’s the media or certain pundits who have a lot to say for themselves in a very irresponsible fashion…

“We know the blue touch paper was lit by owners trying to take football in a certain way, but that’s the symptom, the disease is something else and it’s money in football, and the need for money to be generated and the greed that pervades football.

“Owners operate in a certain way and fans operate in another, but what you’ve got now are fans stepping across the line. They’re going into training grounds, they’re breaking into stadiums. I don’t care if they were let in by people who work for Manchester United, or they broke in – their actions on that pitch are a discredit to English football.

“If you broke into the stadium and the pitch, I don’t think you are fans. If you are a genuine Manchester United fans you must be appalled, embarrassed and feel an element of disgrace for what happened yesterday.

“There’s an element of justifying what happened. We’ve had pundits saying this has been brought about by 16 years of frustration, that this is an opportunity to mobilise – these are the parts that are very damaging.” 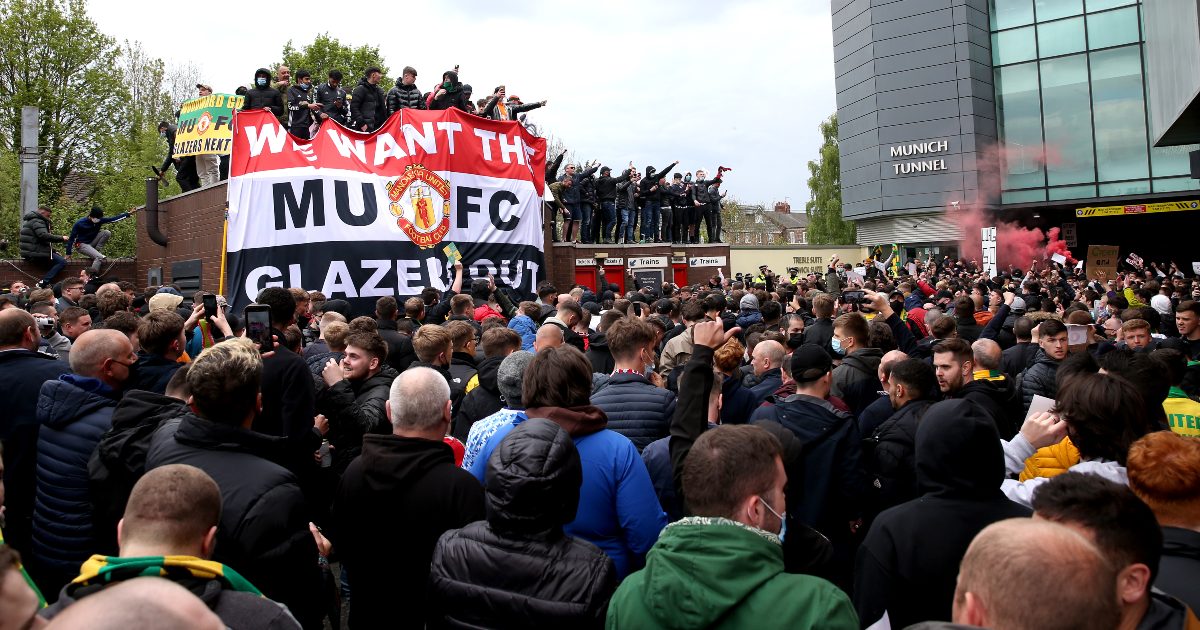 Jordan accused Neville of hypocrisy over his comments in the wake of the out of control protests.

“Today there is anger and I would hope tomorrow it switches towards mobilisation to reform and regular and behind a fan led review,” said the Sky Sports pundit from Old Trafford on Sunday.

“What I would say is, and might be a little naive here, but these two clubs Manchester United and Liverpool should act like the grandfathers of English football, demonstrating compassion and spreading the wealth throughout the family, their experience, being fair.

“But they haven’t done that, they’ve demonstrated self greed and tried to walk away with all the money themselves and left the family struggling below.”

Jordan, though, suggested Neville is guilty of the same thing…

He added: “Gary Neville is a barrack-room lawyer who sits on PFA panels, who says salary caps are something football needs to have, while behind the scenes he’s talking about the fact the PFA should never allow salary caps to try and control football finances.

“The centre of all of this is money, and the irony of this is Manchester United fans will say it’s not about money, but they’re making it about money because the Glazers are taking money out of the club.

“There is a selfish nature in football and it pervades football full-stop. The Premier League, despite the promotion and relegation system, has decimated english football – 90 per cent of TV revenues go into the Premier League and the other ten per cent is left for the rest.

“The hypocrisy of his ownership of Salford when he got a billionaire owner in there who is funding Salford who are, to my mind, losing money left right and centre, who probably breached financial fair play, and all of this is being utilised by Gary Neville to advise a soap box wrapped in hypocrisy.

“Yes, these owners and the ownership models in football right now are flawed, but why are they flawed? Why has it got to his point? Because of the greed across the board in football and the hypocrisy embodied by people like Gary Neville.”