Red Bull junior Yuki Tsunoda found the added power and physicality of a Formula 1 car to be the biggest surprises during his maiden test at Imola on Wednesday.

Red Bull junior and Formula 2 racer Tsunoda took another step towards a potential F1 drive in 2021 by completing his first F1 test for AlphaTauri at Imola, driving a 2018-spec Toro Rosso STR13.

The running only adds to the growing momentum building for Tsunoda to partner Pierre Gasly at AlphaTauri next season as a replacement for Daniil Kvyat.

Tsunoda completed more than the 300km of running required for an FIA superlicence, but also requires a top-five finish in F2 this season to qualify for a superlicence in 2021.

After testing in damp conditions in the morning, Tsunoda was able to complete some dry running in the afternoon, managing both qualifying hot laps and race simulation runs.

Reflecting on his first day of F1 testing, Tsunoda said that while the car itself was easier to drive than he anticipated, it was also more physically challenging.

“It was easier for the driving, but also harder physically,” Tsunoda said.

“I expected it to be a little bit less hard physically, especially on the neck. Because driving in Formula 2, I don’t feel much on my neck, and my neck is pretty strong.

“After I drove a Formula 1 car today, I felt it pretty hard, especially in the braking zone and the braking performance.

“The braking power is more than I expected. I need a lot of training until maybe the next session and next event to drive a Formula 1 car and prepare.” 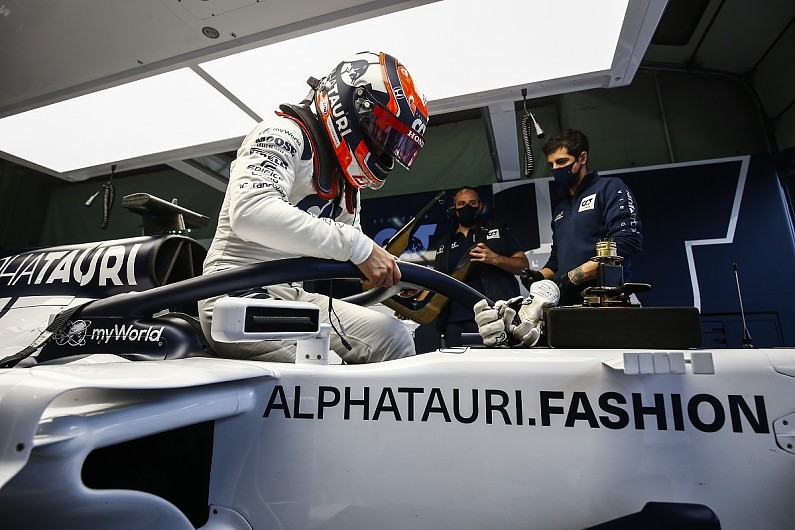 Tsunoda also said the power of the F1 car was big step up from what he was used to in F2, where he has scored two wins and sits third in the championship in his first year in the category.

“After I put the throttle, I initially feel the big power from the engine which I don’t feel much in Formula 2,” Tsunoda said.

“I think that power is more than I expected, and that was, even in the rain, it was really, really big performance for the initial struggle.

“Even in rainy conditions, I think it was more [performance] than I felt in Formula 2 dry conditions. That was the biggest surprise for today.”

Tsunoda was able to draw on his experiences in Red Bull’s simulator to get used to the complex steering wheel and various settings on the F1 car, but was pleased with how he managed it by the end of the day.

“The experience from practicing in the simulator in Red Bull helped me a lot to get used to it really quickly, and the end of the session was really consistently fast,” Tsunoda said.

“Even in race sim, the lap times were really consistent, even while I’m doing lots of things on the steering every lap, almost every single corner. That was a good step for me.”

Tsunoda is widely expected to appear in an F1 practice session with AlphaTauri before the end of the season, and is already confirmed to be taking part in the end-of-year young driver test in Abu Dhabi.